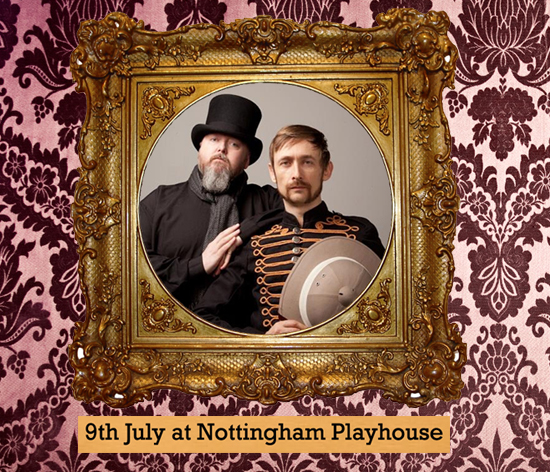 Tuesday 9th July, 2013: Word In Your Ear and The Cricketer Magazine proudly present our Cricket Pop heroes at the Nottingham Playhouse. It's your chance to see Messrs Duckworth and Lewis deliver their unique musical tributes to a certain sporting game.

Fresh from the Word In Your Ear newsletter:

They are simultaneously harmless amusements and the most important things in the world.

Their affinity was first celebrated at album-length in the 2009 record The Duckworth Lewis Method, in which The Divine Comedy's Neil Hannon and Thomas Walsh of Pugwash sang of Empire and Twenty20, Gatting and the ball of the century and travelling to Pakistan in a VW camper van to meet Mr Miandad.

The album found acclaim all over the world, not least in the offices of The Word, where it was, as they used to say, "a fixture on the turntable".

Now it's 2013 and the Australians are back, as are The Duckworth Lewis Method with 'Sticky Wickets'. another glorious long-playing celebration of the bewitching allure of the great game.

To mark its release they're playing a couple of very special shows in the week of the first Ashes Test Match at Trent Bridge on July 10th, organised by Word In Your Ear, the performance wing of the late lamented Word Magazine, and The Cricketer, the world's foremost cricket magazine.

The night before that game the centre of the cricketing universe will be the Nottingham Playhouse, which is where The Duckworth Lewis Method and their full band will be playing songs from both their albums plus other songs that speak to the depths of those who love the game. And Mr Blue Sky by ELO as well. They always do that.

Further details of the bill, which will include like-minded 'turns', will be announced in due course, as will details of their one London show around the release of the album.