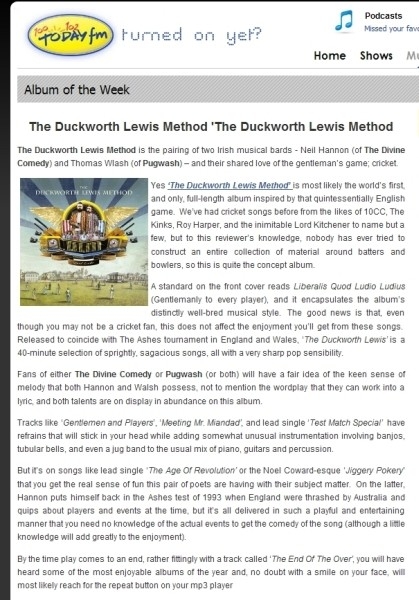 The Duckworth Lewis Method is the pairing of two Irish musical bards - Neil Hannon (of The Divine Comedy) and Thomas Wlash (of Pugwash) – and their shared love of the gentleman’s game; cricket.

Yes ‘The Duckworth Lewis Method’ is most likely the world’s first, and only, full-length album inspired by that quintessentially English game.  We’ve had cricket songs before from the likes of 10CC, The Kinks, Roy Harper, and the inimitable Lord Kitchener to name but a few, but to this reviewer’s knowledge, nobody has ever tried to construct an entire collection of material around batters and bowlers, so this is quite the concept album.

A standard on the front cover reads Liberalis Quod Ludio Ludius (Gentlemanly to every player), and it encapsulates the album’s distinctly well-bred musical style.  The good news is that, even though you may not be a cricket fan, this does not affect the enjoyment you’ll get from these songs.  Released to coincide with The Ashes tournament in England and Wales, ‘The Duckworth Lewis’ is a 40-minute selection of sprightly, sagacious songs, all with a very sharp pop sensibility.

Fans of either The Divine Comedy or Pugwash (or both) will have a fair idea of the keen sense of melody that both Hannon and Walsh possess, not to mention the wordplay that they can work into a lyric, and both talents are on display in abundance on this album.

Tracks like ‘Gentlemen and Players’, ‘Meeting Mr. Miandad’, and lead single ‘Test Match Special’  have refrains that will stick in your head while adding somewhat unusual instrumentation involving banjos, tubular bells, and even a jug band to the usual mix of piano, guitars and percussion.

But it’s on songs like lead single ‘The Age Of Revolution’ or the Noel Coward-esque ‘Jiggery Pokery’ that you get the real sense of fun this pair of poets are having with their subject matter.  On the latter, Hannon puts himself back in the Ashes test of 1993 when England were thrashed by Australia and quips about players and events at the time, but it’s all delivered in such a playful and entertaining manner that you need no knowledge of the actual events to get the comedy of the song (although a little knowledge will add greatly to the enjoyment).

By the time play comes to an end, rather fittingly with a track called ‘The End Of The Over’, you will have heard some of the most enjoyable albums of the year and, no doubt with a smile on your face, will most likely reach for the repeat button on your mp3 player.

READ: Today FM On The Web