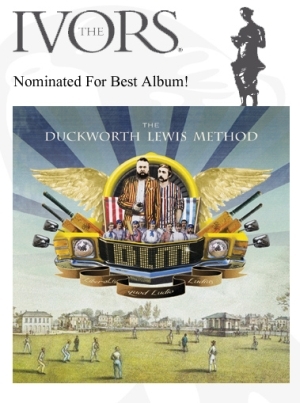 We are over the moon here at DLM HQ as The Duckworth Lewis Method have been nominated for the Best Album Award! It's the 55th Ivor Novello Awards and the ceremony takes place on 20th May at the Grosvenor House Hotel, London. Exciting!

We are honoured that our humble Cricket Pop long playing offering, The Duckworth Lewis Method, has received a prestigious Ivor Novello nomination for the Best Album Award!

Recorded both in Dublin and a stump’s throw down the road from Lord’s in Abbey Road Studios, the album - featuring the singles “The Age of Revolution” and “Meeting Mr Miandad” - was released last July, just a few days before the start of the 2009 Ashes series.

On receiving news of their nomination Duckworth and Lewis commented:

“We, the Duckworth Lewis Method, are politely jubilant to be nominated in the best album category of this year’s Ivor Novello Awards. What joy! What honour! Our hippopotomously titled debut album really was as fun to make as it sounds. And it is to the eternal credit of this august, nay, July institution that ‘a record about cricket’ should be afforded the same opportunities as its less niche compatriots.”

It is safe to say that the chaps are bowled over.

The DLM play at Richard Thompson’s Meltdown Festival on the 17th June.

Update: Congratulations to Paulo Nutini with "Sunny Side Up"