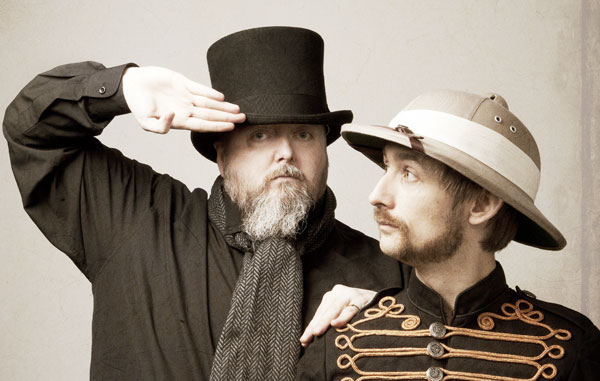 The Duckworth Lewis Method, aka the duo of The Divine Comedy’s Neil Hannon and Pugwash frontman Thomas Walsh, return to album-releasing ways this summer with ‘Sticky Wickets’, their second studio LP. It’s preceded by the single, ‘It’s Just Not Cricket’, the video for which can be seen below.

The band, as its name might well suggest, formed to compose an eponymously titled concept debut on the sport of cricket. It’s a popular pastime, you know. The sound of leather on willow, such an English summer thing: as much a part of a nation’s holiday season consciousness as muddy festivals and soggy tennis.

‘Sticky Wickets’ is out on July 1st – the very same day that the below-reviewed tracks are also available. Sort of. It’s hard to tell when a single is actually released, these days. Anyway, it’s Walsh casting his opinions, so join in, why not, before we’re rained off for the afternoon session…

Icona Pop – ‘I Love It’ < Click on the titles to watch the videos!

Mmm... this should be fun: getting an ELO fanatic, whose last two purchases were an Otis Redding French Stax EP and an album by Montage from 1969 on the Laurie label, to review new releases in 2013. Here we go then. This track from Icona Pop features girls shouting, saying “bitch” and slagging the ‘70s. Smells like the work of a 68-year-old, cigar-toting megalomaniac to me. This has 25 million YouTube hits, which means it has the same musical quality as a cat playing the bagpipes. I don't care.

It's amazing how people are obsessed with the ‘80s again. I remember the ‘80s very well, and it was a time of true horror after 1982. This video has a Des’ree vibe, which blends quite well with the pretty melodic chorus. Good tune but hold back on the Auto-Tune because I'm sure this lady can sing in tune. It wouldn’t sound so good on vinyl, though, through my mono Dansette speakers. Le not cool.

Wellity wellity wellity. This is wonderful. What we have here is The Left Banke backing the bastard son of Alex Harvey and, to be honest, the music has both of those qualities, too. Great video. The guys look very cool. I’m the world’s biggest Lemon Pipers fan and only their hair could rival Temples’. I want to have a cup of tea and a scone with these chaps. Brilliant.

Looks like a video set in Hackney to me which is a good thing, and there's a Peters and Lee vinyl featured, which is fun. I must say that I’ll personally give a tenner to the first person who can decipher the opening line? No Googling! It sounds like Dear Lewis (not my partner) is singing backwards. Too much Auto-Tune again, poor sod. I'm sure he wanted just to sing his little ditty and be done with it. Couple of things that Lewis wants to do: he wants every night to be Saturday night, and to sleep until morning. Good advice kids. Just say NO AUTO-TUNE!

Pretty expensive video, this one. They even got a rabbit to walk on its hind legs. And the poor band, miming drums and guitars, and there ain’t a snare being thwacked nor a bass being plucked within 50 miles of the Swedish guy’s sauna, the same guy who put this together. This is hideous in its overblown waste of money (video) and the fact that they don't know if they're Maroon 5 or 5 Star. Auto-Tuned to buggery again. I'm sure they’re lovely chaps, though, and the rabbit.

Maybe I shouldn't have played ‘She Sold Blackpool Rock’ by The Honeybus before I watched and listened to Indiana. The video is a video with a twist. No it’s not, I lied. The song is like something a friend of mine wrote when I gave him a lend of my guitar when I was 15. I'm pretty sure it’s the same song. I’m going to ring him later and tell him to begin legal proceedings.

Now we're talking! A video and sound to finally make me want to pull that irremovable nose hair out with pliers. This is bad ‘No Limits’ by 2 Unlimited. In fact, I’ll go so far as to say that this is criminal in every way, and if I ever met the people responsible I’d bundle them into the back of a car, take them to the Dublin Mountains and play Dana to them 24 hours a day. Five million YouTube hits can’t be wrong. They can be catastrophically wrong. No Auto-Tune, though, because you need a tune to ‘auto’.

Charlene is a talent. Great voice, great tune, and lovely hair. There are definite elements of Coldplay having a dandelion and burdock with The Feeling, both in the engineering/production and the video visuals. But hey, you can’t keep a good song down, and Charlene has the talent and knack of melody to enjoy a sustained career honing her craft and selling records. Long live pop.

Get the best of Clash on your iPhone - download the app here.