Daily Mail: The Search Is On For Michael Angelow

Ashes streaker who inspired hundreds of others with naked Lord's leap in 1975 asked to uncover himself again. 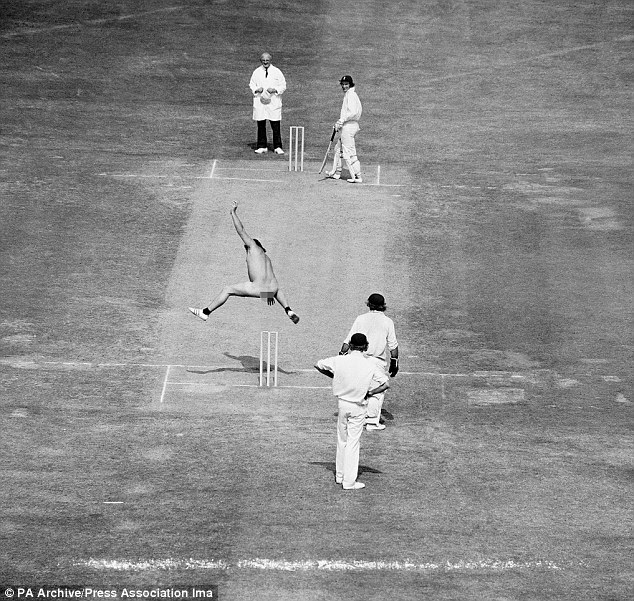 It's since been done at Wimbledon, the Super Bowl, The Open, World Bowls Championship, World Swimming Championships and just about every other sporting event in between.

But daring Michael Angelow was the man who started the very peculiar and popular trend of streaking at major sporting events - and now a search has been launched to track him down.

Angelow caused a scandal with his beer-fuelled dash and leap over the stumps during the Ashes test at Lord's in 1975, inspiring hundreds of others to follow his lead and disrupt sporting action with nude antics.

The Merchant Navy cook, then 24, was honouring a £20 bet when he stripped off and sprinted to the middle, hurdled the bails with splayed legs and then saluted the Nursery End before being led away by police.

Describing the moment on Test Match Special, John Arlott said: 'We have now got a freaker (sic) down the wicket now. Not very shapely, and it is masculine... he is being embraced by a blond policeman and this may well be his last public appearance - but what a splendid one!'

Told at Marylebone magistrates to 'moderate his behaviour,' Angelow was fined £20 for his trouble.

The famous image of his naked exploits was used by cricket-themed band The Duckworth Lewis Method for the cover of their album, Sticky Wickets.

And now the group - formed by Neil Hannon of The Divine Comedy and Thomas Walsh of Pugwash - want to track Angelow down.

'We are rather hoping that Michael Angelow comes out of the woodwork', said Hannon.

'Can we take this opportunity to make a personal appeal for any information on his whereabouts? We'd definitely have him re-enact his famous leap for our next video.'

'We'll provide him with personalised Duckworth Lewis Method cheese,' added Hannon. 'It's in the shape of a cricket ball.'

More photos and a video clip of that famous moment can be found in the article on the Daily Mail website.