Rick Pearson reviews the Lord's show for the Evening Standard. 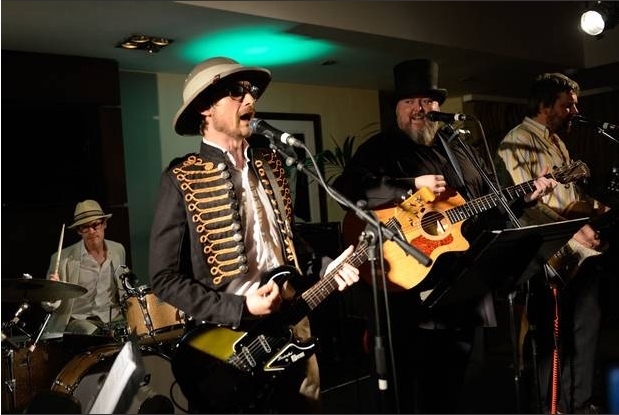 Two Irishmen singing songs about cricket won’t bowl everyone’s bails off but it was pitched perfectly.

The prospect of two Irishmen singing songs about cricket might seem like an unlikely formula for pop success. But that’s exactly what the Divine Comedy’s Neil Hannon and Pugwash’s Tom Walsh have done, under the moniker of The Duckworth Lewis Method.

Their second album, Sticky Wickets, is released just in time for The Ashes and they came to the Thomas Lord Suite at Lord’s to play some of its highlights. That the duo have managed to elongate this most novelty of concepts for so long has much to do with the strength of songs that are only ostensibly about cricket.

That’s Just Not Cricket, for instance, used the beautiful game as a metaphor through which to lampoon bankers, while only the most naïve of listeners would have thought Sweet Spot’s single entendres referred purely to Walsh’s ability to dispense joy through pin-point batting alone.

Yet there were also plenty of in-jokes for the cricketing anorak. First, there’s facial hair: the dainty Hannon sported a Merv Hughes-inspired moustache, while batting partner Walsh had the kind of beard that would make W.G. Grace blush.

Then there were the songs, which name-checked everyone from Pakistani big-hitter Shahid Afridi (the galloping folk-rock of Boom Boom Afridi) and, best of all, Shane Warne’s “ball of the century”.

Sung from the perspective of Warne’s victim, England’s Mike Gatting, it harrumphs, “It was jiggery poker, trickery jokery, how did he open me up? Robbery muggery, Aussie skulduggery, out for a buggering duck,” over Nelly the Elephant-style backing. It won’t bowl everyone’s bails off but, like Warne’s fabled delivery, it was pitched perfectly.