The Huffington Post UK report on The Duckworth Lewis Method's quest to find the star of their album cover. 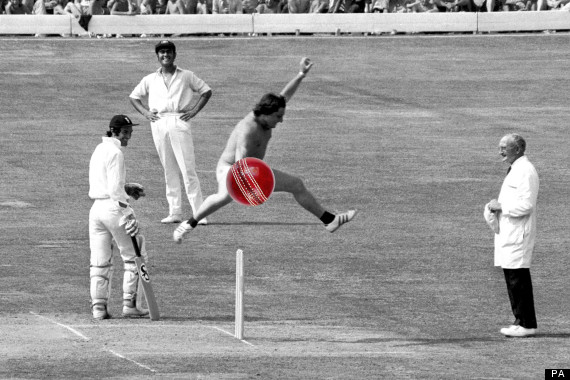 Michael Angelow leaps over the stumps

Cricket-themed band The Duckworth Lewis Method have called for the 1975 Lord's streaker Michael Angelow to "come out of the woodwork", as the 67th Ashes series gets underway.

A Merchant Navy cook, Angelow, then 24, honoured a £20 bet when he stripped off and sprinted to the crease and delivered some new balls in front of 25,000 people.

Nude dashes have occurred at the football, tennis and golf in Britain since, while David Niven had already dealt with one intruder with typical composure at the 1974 Oscars.

The Duckworth Lewis Method used the iconic image for the cover of their album, Sticky Wickets, and want to track Angelow down to appear in their new video.

"We are rather hoping that Michael Angelow comes out of the woodwork," Neil Hannon told the Mail.

"Can we take this opportunity to make a personal appeal for any information on his whereabouts? We'd definitely have him re-enact his famous leap for our next video."

More photos and a video clip of the famous "freaker" moment are included in the article on the Huffington Post website.