The Guardian: Review Of The Lord’s Show

Maddy Costa reviews the launch gig at the Home Of Cricket. 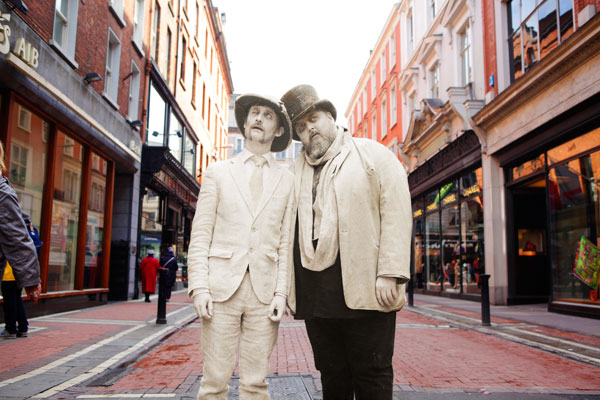 On the face of it, the Duckworth Lewis Method are not designed to appeal to people who've never watched a single over of cricket in their lives. They take their name from an incomprehensible formula applied to help get results in rain-affected games. They perform, po-faced, the Wikipedia definition of "line and length", ponder the introduction of Twenty20 cricket and the fruitless existence of the third man, and lampoon individual players, commentators and events with such affection that anyone who doesn't know their Shane Warne ball from their Shahid Afridi batting might understandably feel befuddled and somewhat outside of the joke.

And yet this collaboration between the Divine Comedy's Neil Hannon and Pugwash's Thomas Walsh is a joyful proposition, because it revels not only in cricket but in a century of pop and the deliciousness of the English language. Sometimes, the balance between the three is skewed: the lyrics to Jiggery Pokery worship at the altar of Noël Coward and inspire genuine laughter, but the music galumphs gracelessly; Gentlemen and Players marries wistful tea-dance trumpet to an autumnal Kinks swirl, though the lyrics lack Ray Davies's acuity. Sometimes they succumb to a novelty style that hasn't been funny for decades: the rock'n'roll strut of The Sweet Spotis particularly criminal. But in the romantic swoon of The Nightwatchman and the sunshine glow of Mason on the Boundary, their take on 1970s rock is faultless.

In between, the duo indulge in quickfire banter that reaches an inspired apogee in an extended riff on Hannon's hatred of cheese, with Walsh imagining a dairy concept album featuring songs about yoghurt (to the tune of Lulu's Shout), Babybel ("now that I've found you, I can't let you go") and gorgonzola (conveniently rhymes with Lola). It's hilarious but, as the chaps themselves might say, just not cricket.