The Irish Examinner USA: Off Their Own Bats

A 2009 article from The Irish Examiner USA. 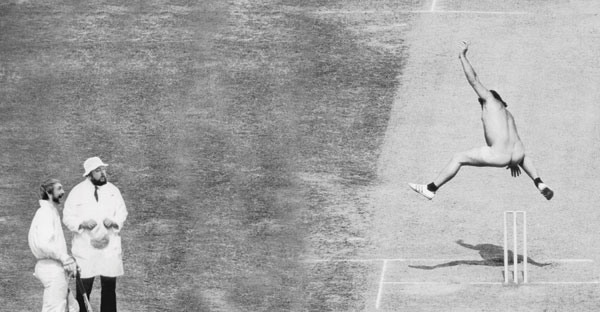 Until now, those few Irish people that had even heard of the Duckworth-Lewis Method, would have known it as a virtually impenetrable method of calculating cricket scores, used in the event of weather interrupting proceedings, and devised by two English statisticians.

Indeed, until recently, the same axiom largely held true of cricket, a sport whose scorelines sound like mathematical formulas designed to work out how long it would take a dozen men, each carrying nine apples, to get to the far side of the sun.

When the Irish cricket team went to Jamaica and sensationally beat Pakistan in the 2007 Cricket World Cup, the overwhelming feeling in the country was not “Wow, we just beat one of cricket’s world powers”, but rather “Wow, Ireland has a cricket team?”

A quick comparison of the English game involving sticks, versus its Irish counterpart probably offers some clues as to why the former has failed to capture the Irish imagination.

Cricket is a ploddingly, protracted game played by men in white suits, where the weather can effectively decide who wins, whereas hurling is the second-fastest field sport in the world, engaging in by amateurs who play as if their very lives depended on it, which, given some of the aggression sometimes associated with the game, means that very well might be the case.

Hardly a contest really. Now, however, Ireland’s unlikely cultural ties with the quintessential English game have been strengthened further still, with the release of an equally unlikely album by the newly minted Duckworth Lewis Method, a musical act formed by two of Ireland’s most celebrated songwriters: Neil Hannon and Thomas Walsh.

First a little of their respective stories.

Neil Hannon has been at the apex of the Irish music scene for almost two decades. The son of retired Church of Ireland clergyman, Brian ‘Hannon the Canon’ Hannon, his childhood was spent between Derry and Enniskillen, where his father was made Bishop of Clogher.

Most music fans will forever associate Hannon’s name with his most successful venture to date, The Divine Comedy, an act that essentially involved Hannon and a loose conglomerate of interchangeable parts, of which he once claimed: “The Divine Comedy will always be my band because… I thought of it first!”

From their 1990 debut, Fanfare For The Comic Muse, to the 2006 book-ending Victory For The Comic Muse, the band released a total of nine albums, which saw them rise from an obscure act whose fan base essentially fell inside the French borders, to a chart-topping phenomenon, whose work was as cerebral as it was idiosyncratic.

Incorporating influences as disparate as Cole Porter, The Smiths and Kraftwerk, he also took inspiration from writers such as F. Scot Fitzgerald, Chekhov and Wordsworth, and carved out a niche as one of the nation’s most ambitious songwriters, in the genre of orchestral pop.

Singles like Something For The Weekend and National Express, crossed over into mainstream pop hit status, but to his credit, he continued to explore new musical territory, a fact recognized when he was awarded Ireland’s second annual Choice Music Prize, for the aforementioned Victory For the Comic Muse.

Hannon’s considerable gifts, work ethic and unique vocal timbre have meant that his time away from The Divine Comedy has not been spent idling away, but rather working on an eclectic set of projects befitting of a such a renaissance man.

Over the years, these ventures have included performing with names like Air and Scott Walker, as well as contributing to the soundtrack for the movie Hitchhiker’s Guide to the Galaxy and TV show, Doctor Who.

Lest we forget, he also contributed to the hugely successful situational comedy, Father Ted, writing its theme song and giving the world the iconic track My Lovely Horse, which has passed into TV folklore.

No less celebrated by the critics, Thomas Walsh has nonetheless spent much of his career traveling under the radar of the mainstream.

A true songwriter’s songwriter, under the guise of his band Pugwash, he arrived on the scene in 1999 with debut album Almond Tea; a work so compelling that it made its way into the Hot Press Top 30 list of the best albums of the millennium, only four weeks after its release.

He followed up this feat with three progressively excellent albums in the form of Almanac, Jollity and Eleven Modern Antiquities, which drew comparisons to everyone from the Beatles to Bryan Wilson, and produced a string of musical highlights that have assured him a place among the finest singer/songwriters that Ireland has ever produced.

Immaculately tailored and often unfalteringly optimistic, his tracks are frequently like bursts of symphonic musical sunshine, armed with exhilarating melodies and soaring harmonies capable of lifting the lowest spirit.

His fans include the aforementioned Wilson and XTC front man, Andy Partridge, as well as a host of critics from the UK to Australia who positively effuse over his work, even as they scratch their collective heads in wonder as to why this artist has not cracked the mainstream of public consciousness.

Mutual admiration drew the two men together after Hannon attended a wedding where Walsh’s band performed, leading them to a natural alliance of two ambitious songwriters whose feet were immersed in pop as they looked ambitiously towards the stars.

The pair first collaborated on Walsh’s Eleven Modern Antiquities, and again when the duo worked together on the Christmas single, Tinsel And Marzipan, which is recognized by many as the finest Irish Christmas single this side of Fairytale Of New York, and raised considerable funds for the Irish epilepsy charity, Brainwave.

Conceived over a batch of pints during a night spent in a Dublin pub, the pair now return with their most ambitious and improbable work to date, a concept album devoted entirely to a game that remains a mystery to all but its adherents, which they describe as “a kaleidoscopic musical adventure through the beautiful and rather silly world of cricket.”

Their greatest trick is that they have pulled the entire venture off with such admirable aplomb, producing an album that must be a contender for Irish album of the year and may even find itself on people’s lists of the best Irish albums of all time.

Debonair, expressive and gloriously eccentric, the 12-track collection oozes the vibrant literary quaintness of a P.G. Wodehouse novel, making it virtually cinematic in scope, as it integrates a vast range of musical influences from Cole Porter to the Beatles, and Harry Nilsson to T-Rex.

Quite simply, it is an utterly unique endeavor that threatens to become a defining moment in both men’s respective careers, despite the fact that it was initially meant to be little more than an indulgent passing fancy.

Though it is not due for release until later this week, in order to coincide with the start of cricket’s Ashes tour, the album has already caused something of a sensation amongst critics, with no less an authority than Stephen Fry announcing himself to be utterly enchanted by its considerable charms in a recent blog on Twitter, while word of its excellence has apparently spread throughout the cricket supporting world who eagerly anticipate its release.

In truth, Hannon had intended to release another album from The Divine Comedy later this year but such has been the initial reception to The Duckworth Lewis Method that those plans have now been put on indefinite hold.

If the Irish cricket team’s march to the quarter finals of the 2007 World Cup gave the sport one of its most unlikely episodes then surely the prospect of two Irish men producing its most defining musical moment has topped even that notable achievement.

Their greatest trick however, is not that they have managed to give cricket its musical high water mark, but rather that such an unconventional basis for an album could potentially provide the Irish music scene with this year’s music highlight. It’s almost enough to make you want to start following cricket.