The Observer: ‘Cricket Forces You To Sit On Your Arse, Which Is Healthy’

The Observer's Michael Hann chats to our Cricket Pop heroes: Neil Hannon and Thomas Walsh explain why their new album coincides with the Ashes – and why they approve of streaking. 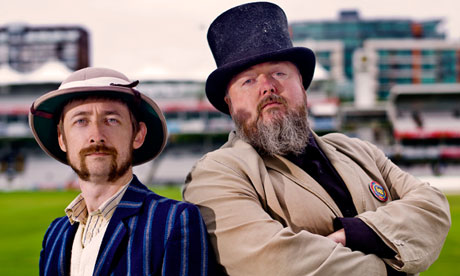 Photograph: Sarah Lee for the Guardian

Scour the official calendar of world cricket and you'll surely notice something missing. Yes, the forthcoming jaunts of the Test-playing nations around the grounds of the world are listed, enabling you to discover whether or not a given city has a Walkabout pub in which to witness an Australian player lamping an English player. But nowhere does the future tours programme make reference to what has become the unofficial opening of an Ashes summer: the release of an album from the Duckworth Lewis Method.

Neil Hannon of the Divine Comedy and Thomas Walsh of Pugwash raised the curtain on England's defeat of Australia in 2009 with their first album of cricket-themed, ELO-adoring whimsy. And now the Australians have returned, so have they, with Sticky Wickets, another album of cricket-themed, ELO-adoring whimsy, this time emblazoned with a cover photo of Michael Angelow, the merchant seaman who sprinted naked on to the pitch in the Lord's Test of 1975 to hurdle the stumps, mid-match.

Though we are at the site of Angelow's infamy, neither Hannon nor Walsh will be repeating his feat: it is extraordinarily chilly at Lord's as Yorkshire pile on the runs against Middlesex. Hannon's pith helmet looks less necessary than his white cricket jumper, and both he and Walsh sip hot coffee rather than cold beer. But the home of cricket is the place where the pair have come to unveil their manifesto for cricket and music to a watching world. A watching world of me, a steward and a man with a Tupperware container of ham sandwiches.

"It's actually the most rock'n'roll of sports, bizarrely," Hannon says. "Witness the amount of famous rock'n'roll stars who love cricket." Walsh proceeds to list the cricket-loving supergroup a promoter could assemble – Mick Jagger, Eric Clapton, Jeff Lynne, the late George Harrison, if he could play from beyond the grave. Lily Allen, too, "for a bit of female vocals".

"That chap from Razorlight," adds Hannon. "The list is endless."

What makes cricket so rock'n'roll, Walsh insists, is its duration. "Five days of going out to see a sports game – that's rock'n'roll." He pauses to applaud the century partnership between Yorkshire's Adil Rashid and Andrew Gale. " These big rock'n'rollers haven't got a second of spare time, but they dedicate five days of it for Tests."

Walsh's early cricketing hero, Bob Willis, took the combination of rock'n'roll and greensward to its natural conclusion, adding Dylan as a middle name by deed poll. Though when one hears him speak as a commentator on Sky Sports, it's hard not to wonder if there is anyone less Dylanesque and mercurial in the world. "When he starts talking he reminds me of a Dalek after a stroke," Walsh agrees, sunnily.

Hannon giggles, then sighs. "Oh God, don't put that in. If we ever meet him …"

Clause two: beautiful language must be part of both sport and music.

"The language of cricket is part of the reason we are writing about it," Hannon says. They cite the broadcasters whose idiosyncratic approach has inspired them – David "Bumble" Lloyd, for example, who coined the nickname "Boom Boom" for the big-hitting Pakistan batsman Shahid Afridi and thereby inspired the song Boom Boom Afridi.

"I love my British psychedelia," Walsh says. "Cricket and its terms lend themselves to that kind of Lewis Carroll, I Am the Walrus period of music – that kind of 19th-century prose that was around in the 1960s."

"I don't want to talk about other sports," Hannon concludes. "But the language of tiddlywinks is beautiful."

"What is the sense in showing a slow motion of a bad injury, or spitting on the pitch, but not someone running across in the nip?" Walsh wonders. "I'd definitely be in favour of streaking, but only the attractive ones."

"Mr Angelow's pose was too good to ignore," Hannon says of the album cover. "And it's totally rock'n'roll. The nude hurdle of the stumps is an art. It's very difficult. I know if I attempted it, I'd just crash through them."

Clause four: cricket should be employed to teach patience to the young.

"That's it!" exclaims Hannon, explaining that the very joy of the sport – of anything good, really – is that it lasts long enough to offer complete immersion. "Surely," he says, "if you like sport, the longer it goes on for, the better. What I find in this modern-paced life in which we live, I find it very hard to sit on my arse and do nothing. It's very hard not to pick up the phone and start doing stuff with it. Concentration spans are definitely diminishing. Nobody can sit on the bus and just stare into space any more. Cricket actually forces you to sit on your arse, which is healthy."

Clause five: no pop music should be played during any sporting event (with one exception).

A blight on football and cricket in recent years has been the inappropriate anthem – the music played over the PA when a goal is scored, or blared out to a few hundred people at Tring when an unknown No 8 comes out to bat in a dead one-day match. The Duckworth Lewis Method do not approve. "It cheapens the game, no matter how good the music might be. What's the music supposed to be for?" Hannon asks. To make younger people feel cricket must be a go-ahead kind of a sport, to play a few bars of Crazy in Love, perhaps?

"And they put some half-naked dancers out there in the freezing cold," Walsh says, shuddering at the thought, before coming to another conclusion. "But hopefully, our tracks will be played over every Tannoy of every game when a player is walking out."

"All over the world," Hannon insists.

And then the lunch bell sounds. The players of Yorkshire and Middlesex troop off to the pavilion and Walsh and Hannon rise. There are top-level meetings with the nabobs of English cricket to attend. There is an Ashes campaign to plan. There is, almost certainly, a buffet lunch somewhere. It's the cricket season, after all.

Sticky Wickets is released on 1 July on Divine Comedy Records