Mr Lewis Writes For The Dubliner

A 2010 article from The Dubliner where Mr Lewis picks up a pen and puts his thoughts to paper. 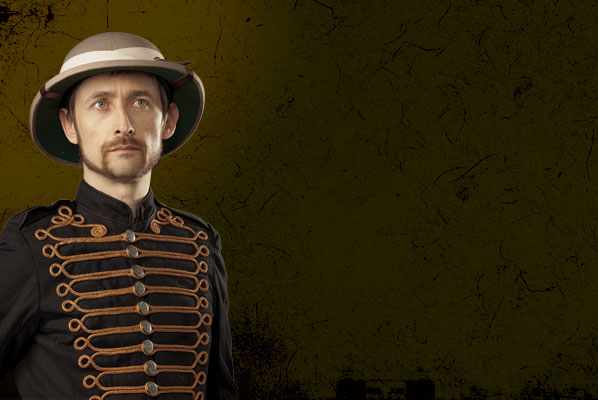 There is nothing so thoroughly stimulating as a day at the races. To obtain the aforementioned stimulus, my good friend Duckworth and I made our annual pilgrimage to Vicarstown for the 10,000 guineas. Old Ducky is a great judge of horse flesh and I hang upon his every word. I could feel the wad of tenners smoldering gently in the pocket of my waistcoat.

To ease the discomfort I took a quick nip of the rather fine single malt in my hip-flask. With every inch of its perilous journey from cake-hole to cockles, my anxiety diminished. And as we stood watching the steam rise from fresh mountains of turd in the paddock, I basked in the sonorous voice of Lawrence Stanley Duckworth and paid close attention to his sage-like advice...
“Just look at the hocks on that, Lewis! Equus majesticus honouratum indeed. Give us a swig, old boy.”
“There you are, Duckus maximus. Here also is the race-card for the main event.”
“I say, give us a goosey gander. A strong field with a great number of potential victors I fancy. Let us look at the pros and cons of each in turn.”
“That, my friend, is an excellent idea. I can see the bookmakers running for cover already.”

“Foto Finish: a fine young thoroughbred, Lewis, bursting with potential. It has all the common characteristics of the contemporary contender. Strong chest, powerful shoulders, four legs... Of course, as with most of the new breed, there is a worry that style could outweigh substance, but that will only be revealed in the fullness of time.
“Could you slow down, Ducky? My shorthand has deteriorated since my days on RSVP.”

“Sorry, Lew-Lew. Moving on, we have the experienced Winter Wave. This animal’s not built for outright speed. Slow and steady wins the race here. Our next entrant is a vision of power and beauty. It has the epithet Enigma, but there is little to bamboozle us here. I’ve heard good noises but I remain unconvinced. A little inexperienced to be competing at this level perhaps. And saddled with the dead weight of a thoroughly outmoded stable.”

“Hmm, interesting. Now what about this Northern Rock beast, Duckster? It’s been getting rave reviews!”
“I’m not at all surprised, Lewis. I’ve been watching it from afar for some time. A silent, brooding monster. An epic war horse that would put the wind up anyone silly enough to compete against it. My only reservation is its rather weak mouth.”
“Hasn’t got a lot to say for itself, eh Mr D? Well, I’m sure it’ll do its talking on the field of battle. Worth a few of Lewis’ hard-earned spondoolas, methinks.”

“A wise choice, Mr L. But first let us progress. Valkyrie is an unusual horse. The polar opposite of Northern Rock. No raw power here. Almost waif-like to the untrained eye. But look. Note the distance between rump and dock. The rounded nature of the withers. She’ll be at the final reckoning, I’d wager. An outside bet, but not a wasted one.”
“Oh, and I thought I had it worked out!”

“Sorry, Lewis. But if it were easy I’d be living in a mansion in Dalkey. Take our next steed, Foolish Genie. If I’d had the gumption to stick a nifty on it a few years back, I’d be swapping neighbourly tidbits with Bono by now. I don’t imagine past form holds much sway today, however. Impossible to know what this horse will do anyway. Willful isn’t the word. There’s a definite DIY ethic at this one-horse stable. And though bizarre silks adorn what rides atop, this one virtually rides itself.”

“What the devil are you on about?”

“It’s just how I see it, old man. I bear no ill will. And so to the enigmatic Supersonic. Now here’s an equine conundrum. I’ve always liked what I’ve seen here. Even gave it a ride out m’self once. But a lack of direction behind the scenes seems to have somewhat hampered its progress. People keep leaving the stable to go it alone. Still, this is a multi-faceted animal and always capable of an upset.”

“But who’s this on the card, Duckworth? Aurora Borealis?”
“Beats me, Lewis. Surely a horse more suited to the dirt tracks of the United States than the satisfying heavy turf of our little isle. Still, it’s a free country and I wish them the very best of luck.”

“And then there’s the Raven.”
“Ah, the Raven. A beautiful, amiable creature cast in the classic mould. I don’t think this fella’s really made for this kind of competition. Too many younger, noisier competitors in the field. To gamble on him would be to go with your heart rather than your head. Is that the last of ‘em, Lewis?”

“Er... no, there’s one more. What’s this? The Method. Owner: IP Lewis; Jockey: LS Duckworth... What a queer thing. What in heaven’s name does it mean, Duckworth? Duckworth! Where the devil has he disappeared to now?”

“They’re under starter’s orders” came the announcer’s voice over the tinny tannoy. Standing on tip toes, I craned my neck to scan the populace for signs of Duckworthiness. But none were forthcoming. Just like him to disappear at the crucial moment, I thought. He’s going to miss all the fun.

I turned round to see a seething mass of thoroughbred sinew and muscle take off as one. A hearty cheer went up from the excited throng, but Ian Percy Lewis did not add his voice to the sound of the crowd. Ian Percy Lewis stood open-mouthed. Aghast. Unable to think, let alone speak. For there, towards the back of the chasing pack, sitting astride a large grey barrel-shaped cob, was an all-too-familiar figure.

“Good God,” I cried, horrified and amused in equal measure. “It’s Duckworth!”
His ample form clinging to the straining beast, my big, brave, bizarre friend let forth a strangled cry of “Tally-ho!” as he swung into the first corner and out of sight.