A 2009 interview with Neil Hannon from orange.co.uk 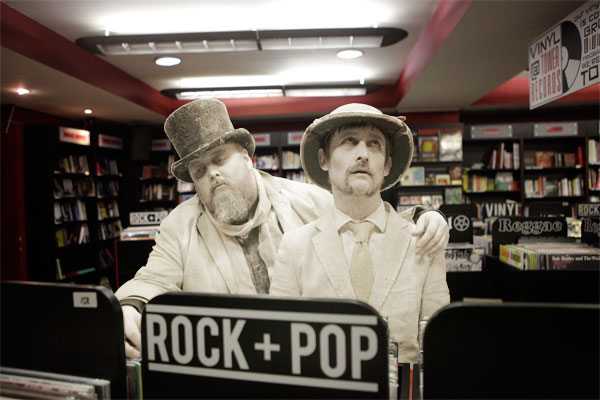 Neil Hannon, lead singer of the The Divine Comedy, has picked a bad time to move house. The Ashes series between England and Australia is at its pivotal stage, but this huge cricket fan is without a television. “It’s completely messed up, I’m missing it all,” Hannon says. “I’m being kept up to date by text.”

The Derry-born Hannon and cricket are a seemingly unlikely combination. But the strong bond is very apparent in his latest album, a mixture of pop songs, anthems and tongue-in-cheek dittys dedicated to the very English world of cricket. For a record which started off as “a bit of a laugh”, The Duckworth Lewis Method (named after two mathematicians who devised a formula now used in the sport) is receiving a mountain of seriously positive reviews. It’s essential listening for cricket and music fans alike.

But Hannon admitted in an exclusive interview with Orange that it would have been impossible to get the all-clear with a proper major label. “They would have immediately said, ‘That’s a stupid idea’! But I’ve got my own label (Divine Comedy Records) so I can do whatever I want! Hooray for artistic freedom!”

The idea was conceived over a pint (or five) when Hannon and Walsh “brainstormed every sort of cool cricket phrase or terminology. We both had little tunes from our other things knocking about that we hadn’t done anything with.

“We didn’t expect to put out a physical album. We thought it would be an internet thing. But it was too good really - the whole package. The thing I really didn’t expect was the brilliant reviews. I thought most people would laugh it off really, but apparently it’s a great record.”

It certainly is. The likes of Stephen Fry, himself a devoted follower of cricket, love it. The lyrics are a treat. Get this from the song Jiggery Pokery - a track dedicated to Shane Warne’s memorable first delivery in the 1993 Ashes which bowled the rotund Mike Gatting. “It was jiggery pokery trickery jokery how did he open me up?/ Robbery muggery Aussie skulduggery out for a buggering duck.” It ends with a rousing rant of “I hate Shane Warne”. Inspired stuff.

“The song is a pantomime really,” says Hannon. “I’ve just exaggerated everything apart from the actual flight of the ball. That kind of a song is like a hobby for me, like building a cathedral out of matchsticks. I like the challenge of taking something that awkward and fitting it into a song. It amuses me. It only took two hours, the whole thing just poured out of me which rarely happens.”

Hannon even quotes a gag supplied by former England captain Graham Gooch, who japed that Gatting, who liked his grub, may have hit the ball had it been a cheese roll instead. “I’ve met quite a few people who have said, ‘I know Mike and I’m going to give him a copy’ and I think ‘Oh God!’ I don’t think it’s a pop at him at all. I respect him hugely as a cricketer and I think he was just unlucky to have to be facing that ball.”

There are other witty songs about “The Nightwatchman”, “Meeting Mr Miandad”, “The Sweet Spot” and “Test Match Special”, the radio programme which commentates on all England matches. The album has earned Hannon and Walsh two appearances in the TMS commentary box (“Brilliant - it got the ball rolling”) and an invite to a dinner at Lord’s.

“It was the most bizarre evening,” explains Hannon. “I was sitting there being given a lesson in spin bowling by England bowler Graeme Swann and then someone tells me Michael Jackson has just died. That put the icing on the cake for a surreal night. But it’s precisely why we made this record - the offers have been flooding in!”

The first single is “Age of Revolution”, which ponders the changing face of cricket as it becomes more glitzy with the advent of Twenty20 cricket. Hannon, who has adopted the monikor ‘Lewis’, remains a traditionalist at heart. “Duckworth (Walsh) and myself kind of embraced Twenty20 with mild scepticism at first. The Twenty20 World Cup was so wonderful and so successful and such good fun, you can’t be all kind of grumpy about it. But it is a different game, a different sport really. The idea of that replacing Test cricket is the ultimate nightmare.”

But isn’t Twenty20 helping to make cricket more appealing and adaptable to all forms of popular culture? “That’s kind of insinuating that I am young and popular and fashionable,” Hannon replies. “None of these things could really be applied to me or Thomas! In one of the first interviews I did, the journalist kept asking, ‘So why is cricket the new rock ‘n’ roll?’ I kept saying, ‘It’s not and I don’t want it to be. I love it because it’s so not rock ‘n’ roll. It’s almost the polar opposite. It takes time and a degree of concentration and it’s multi-layered’. He still wrote down ‘Hannon says, cricket is the new rock ‘n’ roll!’”

From hearing of his love for Test cricket and reading the references to cricket lexicon, players and institutions in the album’s lyrics, you would guess ‘Lewis’ is a cricket boffin. Not so. “I’m a good bluffer,” he says. “I have a dreadful, dreadful memory so I find it hard to remember what happened in a Test last year let alone 30-40 years ago. It’s the same with jokes. I laugh at the same ones over and over again because I forget the punchline.”

He doesn’t even play. “I’m terrified of trying it just in case I’m absolutely appalling or just scared of the ball - because they’re very hard, you know! Thomas is a bit more gung-ho, but his physique might preclude playing. I think I would field at deep square leg - as far away from the action as possible and run away if the ball came to me!”

Hannon’s adoration of the game is therefore based on hours of TV and radio coverage while couped up at his parents’ house after leaving school, “waiting for the wider world to embrace my talents”. The world kept him wondering, allowing Hannon to take up “everything that would keep me amused for a long period of time - complicated intellectual novels and Test cricket”.

His album is a splendid tribute to the peculiarities of cricket. And nothing would be more weird than England thrashing Australia, Hannon’s hugely optimistic prediction. “I keep saying that because if it came true I would look like a genius. In truth, it’s still anybody’s and I look forward to seeing what happens - when I get my bloody TV back!”