Subba-Cultcha review The Duckworth Lewis Method's show at the Home Of Cricket on 8th July, 2013. 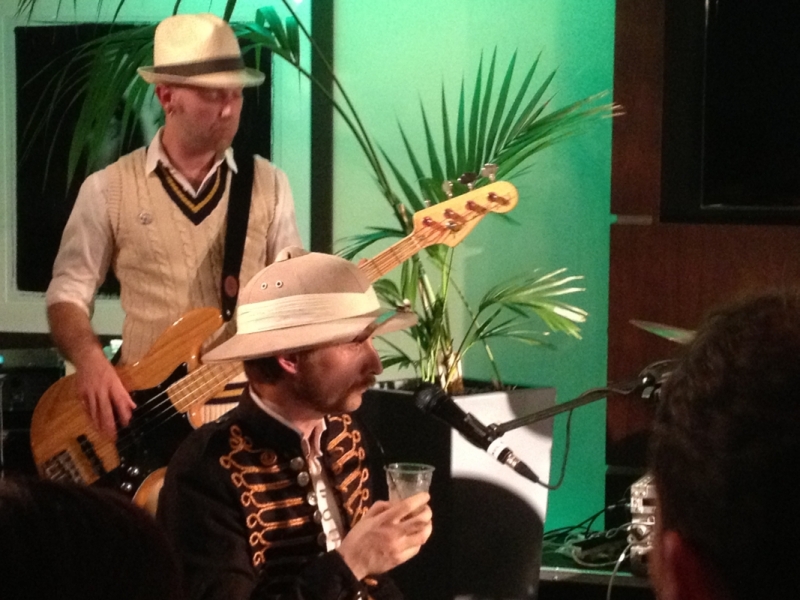 As 10cc once sang, “I don’t like cricket, oh no! I Love it” I love cricket so an invite to see pop songs about cricket performed at the historical Lords Cricket Ground the week of the first Test in the Ashes series (with free Pimms) was always an definite yes! For those of you not up with cricket lingo, The Duckworth–Lewis method is a mathematical formulation designed to calculate the target score for the team batting second in a limited overs match interrupted by weather or other circumstances. It is also the name of the Neil Hannon (The Divine Comedy) and Thomas Walsh (Pugwash) side project, they released their eponymous album in 2009 to coincide with the 2009 Ashes series and their second album ‘Sticky Wickets’ was released in July 2013. As part of the promotion for the new album they performed to a sold out audience twice in one evening.

How you feel about The Duckworth Lewis Method may be dependent on your love of cricket, the demographic of the audience was pretty much who you would expect to see at Lords for the cricket. Kicking things off with the new album and introduction of new band member Billy the Trumpet they start the set with ‘Sticky Wickets’ (a sticky wicket is of course a term used when discussing the effect rain has on a cricket pitch) here is a foot stomping rock number. Musically the songs are basically soft rock with piano and trumpets, lyrically they are incredibly clever. There aren’t many people who could write a song about the Pakistani all rounder ‘Boom Boom Afridi’ or the joyous ‘Jiggery Pokery’.  The set was an equal mix of new and old songs, punctuated with some fantastic onstage banter. Whether it was Walsh offering his musings on the recent Wimbledon victory, dedicating ‘The Nightwatchman’ to Jimmy Anderson or inviting a chap in full cricket whites up onstage, it was clear they were enjoying the experience as much as the crowd. Highlights from the set included the George Harrison esque ‘Out in the Middle’, the Bowie ‘Fame’ inspired electro funk ‘Line and Length’ and ‘Third Man’ complete with The Third Man guitar riff. The only downside was that due to the unusual venue Hannon was hidden from view for the majority of the performance, those not in the front rows missed the full spectacle of his dashing outfit. Minor quibbles aside, the atmosphere combined with the sheer brilliance of songs and banter made for a perfect Ashes warm up. They play a full UK tour in September and I would strongly recommend anyone with an interest in cricket go and see them.