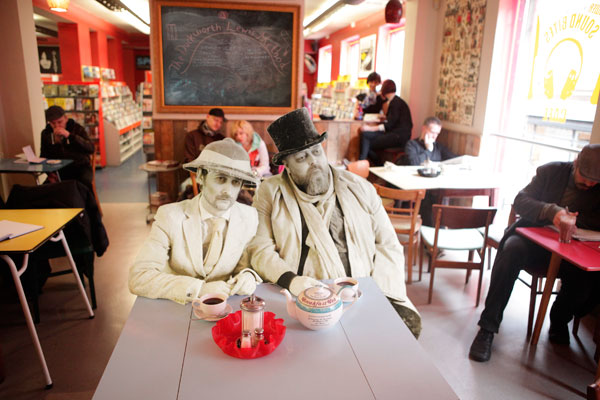 As with so many things these days ,the news first broke to the wider world via Twitter. ‘‘Dear old@jupitusphillip gave me an advance copy of an album called The Duckworth Lewis Method,” Stephen Fry tweeted to his worldwide band of followers (now over 500,000-strong and counting) a few weeks ago. ‘‘Magnif. Loving it very much.”

What the great British polymath didn’t mention was that the record in question is the first ever concept album about the game of cricket, inspired by a drunken conversation between two Irishmen in a Dublin pub.

Perhaps he didn’t think this was the best way to sell it - after all, even its co-creators cheerfully admit that it sounds like a pretty silly idea. Their press release even claims, with tongue lodged firmly in cheek, that it’s ‘‘possibly the least necessary album of recent years’’.

‘‘In fact, we’ve both been flabbergasted by the amount of interest there’s been, here and in Britain,” says Neil Hannon, better known as the Divine Comedy and, for the purposes of this project, the mutton-chopped Lewis.

‘‘It turns out that cricket is a kind of Masonic thing - as soon as you declare your interest, all these secret fans come tumbling out of the closet. We’ve even been interviewed on BBC Radio 4 in the Test Match Special commentary box during a game at the Oval, which has to go down as one of the most surreal moments of my life.

‘‘I’ve spent all these years making carefully crafted pop albums that nobody would feckin’ buy,” says Thomas Walsh, the guiding spirit behind Dublin band Pugwash and cast today in the role of Lewis’s bowling partner, Duckworth. ‘‘Now it looks like this ridiculous, throwaway idea is going to be far and away the most successful thing I’ve ever done.”

Fooling around with cricket bats and balls in the suitably refined surroundings of the Library Bar in Dublin’s Central Hotel, Hannon and Walsh are in chipper form. As they laughingly agree, they make for an unikely pair - one the foppish son of a Northern Irish bishop, the other an earthy Dub who clearly won’t be troubling the X Factor any time soon.

One thing they do have in common, however, is an uncanny knack for coming up with timeless pop melodies - and for all the flippancy that surrounds The Duckworth Lewis Method( the name is a cricketing term for settling matches stopped by rain), it’s clear that they’re both intensely proud of the album that critics have inevitably dubbed their maiden delivery.

Lead single The Age of Revolution celebrates the global popularity of cricket, with former Empire countries now regularly beating England at their own game. The song Test Match Special evokes the simple pleasures of lazing in a comfortable chair with nothing to do but watch a sporting contest that takes the best part of a week to unfold. The Sweet Spot is an innuendo-heavy appreciation of a well-judged shot and features vocals from Hannon’s girlfriend, well-known Irish musician Cathy Davey.

The album’s centre piece, however, is Jiggery Pokery - a Noel Cowardesque account of Mike Gatting facing the ‘‘ball of the century’’ at the Ashes in 1993, featuring comedians Phill Jupitus, Alexander Armstrong and Matt Berry chorusing ‘‘baboon, baboon, baboon’’ in the background and culminating in the impassioned cry : ‘‘I hate Shane Warne!”

While Duckworth and Lewis are as one in their undying love for what they call the king of sports, they came to it by very different routes.

‘‘There was a pretty decent team at my school in Enniskillen, Portora,” Hannon recalls. ‘‘But I was far more likely to be found in the music room, desperately avoiding anything physical. Then I spent about five years lingering like a ghost in my parents’ attic while I waited to become a pop star, so watching cricket became the perfect way to fill in all those days of nothingness.”

‘‘I got into it as a kid when we went on our holidays to Wexford and bought these cricket sets in plastic bags,” says Walsh. ‘‘Myself and my brother would head over to the field and play all day, hitting the ball and taking three hours to find the bloody thing. Then we’d go home and paint stumps on the walls of the local Kellogg’s factory in Drimnagh, but the concrete wasn’t exactly an ideal surface - so we headed out to the little pitch across from the polo grounds in the Phoenix Park whenever we could.”

Cricket, of course, has traditionally had something of an image problem in this country - partly because of its association with cut-glass accents and cucumber sandwiches, partly because it’s the national sport of our old colonial oppressors. The recent heroic exploits of the Irish cricket team, however, have reinforced these fans’ belief that such ancient prejudices should be firmly consigned to history.

‘‘If Croke Park can finally open itself up to ‘foreign’ games, surely it’s time to recognise that cricket is just a sport like any other,” reasons Hannon. ‘‘Some people complain that they can’t understand the rules, but I’ve been watching it for decades and I still don’t get them all either. To me, all those silly names and archaic laws are just part of the fun - I mean, you’ve got to love a game that can go on for five days and still not produce a winner at the end.”

‘‘Reading about it is just as much fun as watching or playing,” Walsh enthuses. ‘‘The history of cricket is so steeped in all these brilliant stories and characters. I’d like to think that anybody could enjoy this album, but our fellow fanatics will certainly get a buzz from all the allusions to famous players and teams in the lyrics.”

The pair first met a few years ago at the wedding of Graham Linehan, co-creator of Father Ted and a major fan of both musicians. As they recall, they bonded more or less immediately - not so much over cricket, however, as a worrying shared enthusiasm for the symphonic rockers ELO. In 2006 Walsh asked Hannon to contribute to a Pugwash charity single for Christmas, while more recently they’ve been co-writing songs in the hope of selling them to other artists.

‘‘Then one night we were drinking in the Lower Deck in Portobello and the idea of knocking out a few cricket ditties came up,” says Hannon. ‘‘Four pints of Guinness later, I had a notebook full of ideas and phrases.

We were basically just messing about, thinking that we might release it as a novelty download - but in fact, the lack of pressure that goes with a normal album gave us a creative freedom that turned out to be really valuable.”

‘‘Neil came up with a load of brilliant tunes, so I thought, ‘S**t, I’m going to have to try and match him,”‘ is Walsh’s characteristically blunt description of the process. ‘‘But he did all the subtle stuff, really, the lovely little strokes to the boundary - I’m more of a heavy slogger.”

As the project took shape they began to grow into their Duckworth and Lewis alter egos, right down to the stripy blazers and Edwardian facial hair. Walsh was blessed with a beard to start with, which he has developed in to a bog brush that makes him look uncannily like the great WG Grace.

Hannon opted for a luxuriant handlebar moustache, admitting that he felt some trepidation the next time he entered his local Spar. ‘‘Luckily they paid me exactly the same attention as usual - none at all,” he reports wryly.

Fans of the Divine Comedy and Pugwash will be relieved to learn that all this extracurricular activity has had no effect on the bands’ regular workrate. Hannon has a new album more or less ready to go, although the unexpected level of interest in The Duckworth Lewis Method means that he’ll probably postpone its release until next year. He’s also nearing completion of his long-awaited musical, an adaptation of the 1930 children’s novel Swallows and Amazons that will be staged by London’s National Theatre.

‘‘It’s fun for all the family, lashings of ginger beer and messing around in boats,” he says in a heavily ironic tone. ‘‘But it’s always good to try something different, because the whole album-tour routine gets monotonous after awhile.”

Walsh, meanwhile, is preparing to release Pugwash’s back catalogue in Britain and hoping that the current bout of publicity over there will give him the commercial break he so badly wants.

‘‘My problem is that I write classic, happy pop music while people seem to prefer the kind of enforced angst that you get from all these middle-class singer-songwriters,” he laments. ‘‘I’ve a lot more to be angry about than they do - I mean, I’m broke and I live in a bedsit! But I write songs like the Beatles and the Kinks because that’s the kind of music I love.”

For now, Duckworth and Lewis are focused on the upcoming Ashes tour, long summer afternoons and the comforting thwack of willow on leather that has the power to soothe even the most troubled spirit.

‘‘Cricket is the love that dare not speak its name,” Hannon concludes sagely. ‘‘It’s not the new rock ’n’ roll and that’s exactly why we love it. It’s a bit like reading War and Peace - there may be some boring bits along the way, but it’s all worth it in the end.”

The Duckworth Lewis Method is out now on 1969 Records